Trading the Dependable Ford for a Lemon

I have been considering the proper analogy for charter schools. I chose something that most people can relate to, cars.

The charter school industry would like to sell me a new car. They are building it up as the best, new and shiny, with lots of bells and whistles. As I begin to look into it I find a Yugo. 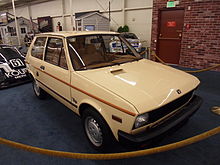 The Yugo, a modified Zastava Koral from Yugoslavia sold in the United States, was roundly panned for its poor performance, poor build quality and numerous safety defects, enough to where the car became the frequent butt of jokes during its time.[41]The cover of the February 1986 issue of Consumer Reports featured a Yugo getting stared down by a Peterbilt truck with the caption “How much car do you get for $3990?”[41] The included review, which slammed the car, said that a used car was a better buy.[41] In 2000, Car Talk voted it the “Worst Car of the Millennium”.[41] Additionally, the Yugo was included on Time magazine’s list of the 50 worst cars of all time and CNN’s list of the “10 Most Questionable Cars of All Time”. Dan Neil wrote that the Yugo is the “Mona Lisa of bad cars” that “had the distinct feeling of being assembled at gunpoint.”[42] Including it in Automotive Atrocities! The Cars We Love to Hate, Eric Peters said that the Yugo was “less reliable than the exchange rate of an African ‘people’s republic’ or a Halliburton financial disclosure“, that it “[taught] folks the hard way about getting what you pay for” and that “The Yugo will likely hold in perpetual ignominy the title of ‘Worst Car Ever Sold to the American Public'”.[10]Jeremy Clarkson drove a Yugo 45 and said of it, “I got my foot welded to the floor – absolutely welded to the floor – and all that happens is that I’m chewing up petrol in a miserable 5-gallon tank, you’ll use it up in about two minutes! And look at it! And it gives you a headache! The hateful, hateful car!” Describing its performance as so bad “you’ll get overtaken by wildlife,” Clarkson eventually destroys it with a tank.[43]
The Yugo is considered one of the worst cars ever made and sold in the United States, EVER.
Don’t let the charter industry sell you a Yugo!
David R. Taylor
30-year Teacher, Coach, and Principal

This entry was posted in Uncategorized. Bookmark the permalink.

A site to discuss better education for all

"That all citizens will be given an equal start through a sound education is one of the most basic, promised rights of our democracy. Our chronic refusal as a nation to guarantee that right for all children.... is rooted in a kind of moral blindness, or at least a failure of moral imagination.... It is a failure which threatens our future as a nation of citizens called to a common purpose... tied to one another by a common bond." —Senator Paul Wellstone --- March 31, 2000

Elected school boards are the bedrock of American democracy.

"Dedicated to the premise that no matter what 'experts' say, trends in Education really are fleeting; and that the ONLY goal of all school employees should be to work with parents to help their students become better people in June than they were in September."

"To sting people and whip them into a fury, all in the service of truth."

A Parent's Thoughts on Education in the Era of Reform

My thoughts on public education and other things

This WordPress.com site is the cat’s pajamas

Thoughts on public policy, and the evidence that supports them.

A blog about education by a math teacher

Mostly Education; a Smattering of Politics & Pinch of Personal

The Science of Human Potential

Understanding how to be the best you can be. Professor Grant Schofield.

A poetry teacher defending ALL students and their families

The War Report on Public Education

For the Advocacy of Public Education

An insider's look at education, teaching, parenting and coming of age.

Smile! You’re at the best WordPress.com site ever

DIARY OF A PUBLIC SCHOOL TEACHER

Writing my way through the school year!

Reality Check on What's Really Going on in American Education

Fun, unusual and forgotten designations on our calendar.

The Mind of Hammy

Thoughts and opinions on just about anything

Supporting public schools and the children they serve

College In The Cornfield

Double majoring in English/Secondary Education in the middle of no where.

Three Guys' Analytical Glance into the Political and Cultural Conundrum

Hoping that Hope is the cure not the cause.

A "Fuller" Look at Education Issues

Examining K-12 and higher ed issues across the country by Dr. Ed Fuller

WordPress.com is the best place for your personal blog or business site.

The latest news on WordPress.com and the WordPress community.